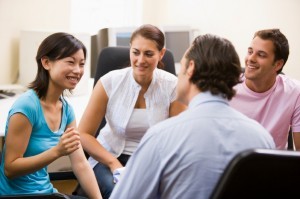 Relative clauses are a rather complex grammar structure, but teachers can help their students to learn this structure in fun and communicative ways by thinking about where the ‘language lives’ in our every day life and how we use it. The three games and activities I will explain below are a great way to teach relative clauses while integrating writing, speaking, reading, and listening skills.

–The Advanced TESOL Courses by OnTESOL Include a Comprehensive Grammar Module–

This is a good “get to know you” game, where students have to guess who wrote which clause and practice learning the names of their fellow peers.

Next write out a defining clause on the board to compare the differences. Ask the students what the structural differences are between each sentence and explain that we use commas in all non-defining clauses. Provide another example with a place and move through the above explanations and elicitation with the students. Explain that we use ‘which’ or ‘that’ with places.

Have students brainstorm at least two people they admire and two places they have visited that they really liked, give examples if they cannot think of any. Have them write, for example, “I like Hamburg, Germany” or “I admire my father.” Then have the students finish the sentences by describing the person or place in the sentence, creating a clause with the appropriate pronoun. Once complete, have them fold up their paper and give it to you. Toss the paper around in a hat or mix them up yourself. Pass the sheets of paper around to each student. Students must then open them and guess who wrote the sentences.

Give students a sheet with many different images of objects, such as this one, and have them work in pairs to describe the objects using a relative clause without naming the object so that their partner can guess what it is. For example, if partner A looks at the image of an umbrella, they would describe its use to their partner: This is a thing that you use to protect yourself from the rain. Then the partner would have to guess what the object is. Students switch turns going from one object to the next.

This activity is one where you can make an exception and allow your students to create a run-on sentence! After explaining the different pronouns and the structure of a relative clause, explain to students that, as a whole class, they are going to create a ‘never-ending sentence.’ Write “Never-Ending Sentence” on the board. Start the sentence with a clause of your choosing i.e. my teacher is a person who loves to eat chocolate every day. Go around the room asking students one by one to come up with the next clause, explaining that it has to be a sentence with the relative pronoun who because we are talking about a person. Keep going around the room until you’ve asked every student for a clause. Once complete, have one student read the whole sentence aloud and have a good laugh!

How to Teach Gerunds and Infinitives